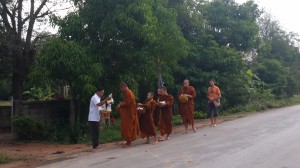 I once asked Ajahn during alms round whether he sometimes felt bad that he couldn’t say thank you to his donors. The question came from the fact that I felt a little bad when people would kneel to make donations, and he would walk on without even looking at them. The rule against saying thank you is part of Vinaya, the Buddhist code of ethics established by the Buddha 2500 years ago. The idea is that monks should accept all donations indiscriminately and should eat whatever is dropped in their bowl, so as to avoid developing attachment or preferences for particular households. In fact, pintapata (alms round in Pali, the language spoken by the Buddha) literally means “dropping a lump”. Monks should see the offerings as lumps, and they should not develop attachment to any lump over another.

But he replied that he is actually hugely grateful to his supporters. In fact, vindabat – alms round in Thai, derived from pintapata in Pali – is a vital part of his practise, a daily reminder of care and gratitude and interdependence between people. He is always in a cheerful mood during vindabat. He obviously finds the experience quite nourishing, and not just for his body. People get up early to cook for him day after day, and they are always there at 7 am when he comes around. They remove their sandals and kneel in the dirt for the privilege of feeding him. They make merit through this act of generosity and care, and making merit increases the likelihood of a good rebirth. But basically they do it because it makes them feel good. And the monk feels good when he sees the joy they derive from practising generosity.

He explained that in his 18 years in the community, his body has been nourished every day by the donations he received. If it is true that in any seven-year period, the body renews every single one of its cells, then the villagers’ donations have renewed his body more than twice during this period. Every  morning, he is reminded that he is what these people put in his bowl. How could he not feel grateful? It is not gratitude itself that is forbidden by the Vinaya, but rather attaching to certain people or certain kinds of food. In fact, not only is gratitude not forbidden, it is actually the core of the practice.

As we walk down the streets, the same 1500-meter circuit every morning, Ajahn accepts all donations indiscriminately, calmly scanning the surroundings, and sometimes exchanging a few quiet words with donors. He knows all of them fairly well. Monks often act as counsellors in Thailand, and people trust them with their most intimate secrets. Ajahn knows the personal story of all his donors because they have confided in him, and they keep him updated on their lives. He often asks them how they’re doing, or they might give him some news about a certain situation. Every day, I am touched by the sincerity and devotion of the donors. Entire families come out, from newborn babies to grandparents. Every day, a lesson in humility and gratitude.

Vindabat is a symbol of the interdependence between monks and laypeople, which explains why monasteries are never too far away from villages. Monks are not allowed to cook or handle money, making them entirely dependent on the lay population for their survival. In exchange for the generosity they receive, they give spiritual support, they teach the Dhamma (the teaching of the Buddha), they counsel and listen, and they give opportunities for people to make merit.

This system of mutual dependence has stood the test of time and is an essential part of the social fabric in Thailand. And although the monk is not allowed to say thank you, the entire ritual is built on and reinforces gratitude. I’ve gone on vindabat now every morning for almost six weeks, and I now think that saying thank you would actually be inappropriate, because it would imply that the monk sees himself as indebted toward the donor, when in fact both parties are both giving and receiving, and both are equally grateful toward the other.