One of the few opportunities for exercise at Shwe Oo Min monastery is the alms round every morning at 6:40. This is a one-hour walk through the village, during which the 100 monks and novices collect rice and other small dishes prepared by the villagers. I’ve been going almost every morning for the last few weeks. I already published one post on this topic a few weeks ago (http://wp.me/p7MVjR-1Z), but I wanted to revisit it, as I’ve learned so much more since then.

The things that strike me the most about alms round is the devotion and the generosity. This tradition has remained basically unchanged since the time of the Buddha (2,500 years ago). Monks walk barefoot and silently in a single file, gazing down, in order of seniority (from ordination date). As the procession moves along, those villagers who have prepared food come out of their houses and shops with their pots of rice and sometimes small dishes of meat or vegetables. The donors are mostly women, but sometimes men also, usually wearing nice clothes. They remove their sandals before serving the monks. There is no eye contact, and no words are exchanged. The monks open their food bowls, and the donors drop a scoopful of food in the bowls. In Buddhist countries, this food can be anything, and the food will mix in the bowl. In Kon Tala Paung village, only rice gets dropped in the bowls, and other food items are collected separately.

In Pali, the language in which the Buddhist scriptures were written down (some 400 years after the Buddha’s passing), the word for alms round is pintapata, literally “lump-dropping”, and monks are known as bhikkhus, literally “those who live on alms”. The monks are to accept gratefully whatever “lumps” of food are “dropped” in their bowls, and will never request anything in particular or attempt to develop preferential relationships with particular laypeople. The Buddha only ate once a day, just before midday, and he attributed his good health to this. The monks would meditate for a few hours before heading out into the village. This would give time to the villagers to prepare food, and would allow monks to see where they put their feet (and avoid dangers such as snakes and scorpions). Whatever food was collected could not be saved, and had to be eaten that same day. This ensured the sangha’s dependence on the laity. This rule is still mostly followed today, although we eat twice a day, and some monasteries don’t do alms rounds for various reasons.

Usually, lay men and women who want to accompany the monks on pintapata follow the procession at the back. But a few days ago, I was asked to help in the front of the line. I carried a basket of small metal containers in which we deposited the non-rice dishes donated to the monks. People call these helpers kapiyas, which is a pali word. I accompanied a Burmese kapiya and copied what he did. The first monk in line touches the plate of food held out by the donor, after which the food is dropped in a container by either the donor or the kapiya.

Many generations take part in this ritual, from tiny children to the elderly. Many people are down on their knees during the procession, hands in prayer position or down on the ground if the person is bowing fully. Even small children do this. I’ve seen ladies kneel down in the mud in their beautiful dresses. After the procession has passed, the ladies collect the grains of rice that have fallen on the ground, so that people won’t desecrate the blessed food by stepping on it. Feeding the monks is one of the many ways for people to gain merit. In the Buddhist religion, people don’t usually meditate, but they pray, do good deeds and accumulate merit so that they can gain a good rebirth. 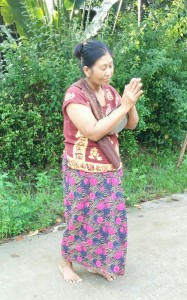 This is a sacred activity, and everyone knows the numerous details of the ritual. It is part of life in every village in the country, and has been so for thousands of years. Every morning, people know that the monks will come at a certain time, and this is a blessing. Life continues as the monks move through the streets. Villagers are in their shops, are walking to school or riding their bikes or scooters. They go about their business. In other words, pintapata is a normal part of daily life. A sacred part, for sure, but also normal.

The monks’ bowls fill up quickly, and two other kapiyas push a cart carrying a large pot in which the rice is transferred when the bowls get too full. This rice will be served at lunch, and the small dishes that I helped collect today will be served to the monks only. The rest of us (and the monks as well) will eat food prepared at the monastery with donated money. In the office, giant boards on the wall indicate the names of donors for breakfast and lunch for the current month and next month. If you wish to donate for a meal, you must choose a day that is still unaccounted for.

I can’t help but feel moved by alms round. Here is an ancestral tradition that has stood the test of time and is still going strong. It symbolizes the profound respect of the people for their monastics, but also the very real symbiosis between the laity and the monastic community. The monks are traditionally completely dependent on the laity for their material survival, and in return, the laity receives blessings and teachings from the monks. I had rarely witnessed this level of devotion, and it is a bit shocking to a Western mind. The ritual is deeply sacred and deeply woven into the social fabric. It is humbling to witness this display of care and community spirit repeated every day in such a natural way. I try to find an equivalent ritual back home, and draw a blank.

This is a poor village, with very simple homes (generally leaky wooden shacks) along muddy alleys and streets, but what I see is community and a pervasive peacefulness. I can’t know for sure, but I suspect people are happier here than in any of our “developed” Western cities. I suspect there is less loneliness, less “mental illness”, more laughter, more community. These simple homes house multiple generations, and young and old mingle on the streets. One should be careful not to romanticize the level of happiness here, meaning these people are also human and surely suffer like the rest of us. But they are definitely poor by Western standards. However, walking through these streets every day, I don’t get the sense that most people think of themselves as poor or deprived; they carry themselves with dignity and lightheartedness. And every act of generosity toward the monks reminds them that they have wealth to share.