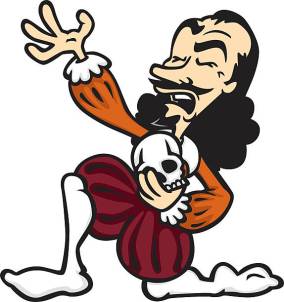 “My acting teacher used to say that there were no small roles, only small actors,” said Ajahn. I had asked him about feeling undervalued. I said I always felt like I should be doing something big, something other than whatever I was doing. “I think the size of your action is irrelevant,” he continued. “What counts is how present you are. This is what determines how fulfilled you are from moment to moment. No matter what you do, if your mind is elsewhere, then you are not really here. And how can you feel good if you want to be elsewhere, doing something else? You know, in this country there are many very humble people and also many wealthy people. Do you think the wealthy are happier than the humble? I think the role is irrelevant. What counts is the extent to which you inhabit each moment.”

I thought of how un-present I am most of the time, my mind usually wanting something other than what it has. “But Ajahn, how do you get there? I find most of the things I do sort of tedious and uninteresting, and I rush through them in order to get to what I think are more exciting things. I definitely have a hierarchy of occupations in my mind. For example, I value reading more than cooking, so I’ll spend as little time as possible in the kitchen, so that I can have more time to read. And on a bigger scale, I am always thinking of what I could do in my life that would be more meaningful than what I’m currently doing.” He was listening intently, nodding. After a few seconds, he replied: “Well no matter what you do, the bottom line is the quality of your mind, isn’t it? And it seems to me that if you’re rushing to get to the next moment, then your mind cannot be happy. The key is to be entirely here, no matter what you’re doing, and I think the secret to being entirely here is to invest yourself fully. To do your best, whatever you’re doing. This is how your action becomes meaningful. How can your reality be meaningful if you’re trying to escape it all the time, desiring something else?”

After a few moments, he continued: “In other words, small things are as valuable as big ones, and the only thing that counts is to do your best, to be completely into whatever you’re doing. This was the lesson I learned from my acting teacher. I was given a one-line role in a play once, but I didn’t feel diminished at all. I rehearsed my line as if I had the lead role, and my classmates thought I was weird. I never got a single role through auditions, but I didn’t feel belittled, because I always did my best.” I was nodding, thinking of my own life and all my dissatisfaction. “And it’s the same when I scrub the toilet,” he continued. “I do my best, even if I know that by tomorrow it will be soiled again.”

“Your full potential is whatever you’re doing in the moment, not in the future,” he continued after a pause. “Whatever you’re doing, if you’re doing it 100%, then that’s your full potential. If you imagine that your full potential is elsewhere, in some imaginary future, first of all, you’re not here doing your best, and second, how do you know that when you get there, you’ll be fulfilled? Maybe you get there and you’re still imagining some other reality. And this is what would happen for sure. This is why people with big jobs and lots of money are not happier than the underprivileged. If you have this belief right now, the belief that you’re not living up to your full potential, then you will continue believing this even if I give you the biggest job in the world. In other words, it’s not the job that counts, but the quality of your mind.”

One thought on “No Small Role”