Already ten days as a monk. I am part of a nine-monk sangha, including our Ajahn (teacher). The generosity of the Thai people is what continues to impress me the most. Day after day, they get up early to cook for the monks and await our arrival in the village between 6:45 and 7:15. All over the five Theravadan countries (Thailand, Myanmar, Sri Lanka, Lao and Cambodia), this has been a daily ritual for centuries, if not millennia in some places. A living testimonial to the human capacity for generosity and kindness, and for faith in the path of the Buddha.

For 2,500 years, people have lined up every day and knelt on the ground, sometimes in the mud, for the privilege of feeding monks. This is a holy part of their day, a most precious moment where they get to show the best of themselves, and they wouldn’t trade it for anything. Young adults showing their two- or three-year-olds how to offer the food: first raise it to your forehead, eyes downcast, then deposit it in the monk’s bowl. The alms round, Vindabat in Thai, was called pindapata in Pali, the language of the Buddha, meaning “dropping a lump”. Today they drop little cooked dishes poured into small plastic bags. 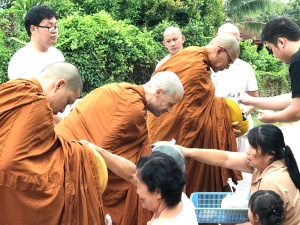 Now that I’m part of the Buddha’s Sangha, I have renounced my identity as a foreigner, a house-dweller, a person-of-the-world. I have gone forth, meaning I have left worldly concerns behind (other than my blog and a few other things 🙂 in order to embark on the path shown by the Buddha. And the locals, including those who saw me every morning for three months walking with Ajahn as a layperson, now treat me exactly the same as the other monks. I have shaved my head and taken on the robe and the bowl, and this is a commitment which is taken quite seriously by Thais. Whereas there were often amused comments about me when I was a layperson, I have yet to see any sign of amusement now that I wear the robe.

All eight of us junior monks (ages 21 to 65) intend to stay in the robes for the traditional three-month rains retreat which started a week ago. It is expected that most of us will disrobe and go back to our lives after this period, and yet we are deemed worthy of utmost respect, even for such a short commitment. Every day for the past three months, I have witnessed this ritual as a layperson and have always felt uplifted and mystified by it. And I now have the incredible privilege of participating not as a helper but as an actual mendicant. The food that is dropped in my bowl is what I will be eating in a couple of hours, and it will be my only meal of the day.

As each supporter deposits their offering in my bowl, I am deeply moved by their obvious devotion and faith. For each one I utter a silent prayer of goodwill and happiness. How can I not be deeply humbled? I am a foreigner and probably wealthier than most of them, and yet they kneel in the dirt to feed me. There are no questions, no judgments, no conditions. And every day for the rest of my life if I so desire, these people, their children and their grandchildren will feed me with complete sincerity, without flinching. I am moved to tears when I think of this. I have so much gratitude toward these people, the living proof that human beings are capable of such magnanimity. It is so easy to forget that this generosity is also part of who we are, that we are not just the creatures of greed and anger and pettiness that the media would portray.

And according to the Buddha, this current of generosity and goodness runs much deeper in us than the waves of greed and delusion. Love, kindness and peace are fundamental features of our hearts and minds, and they naturally shine forth like the sun when they are no longer obscured by the clouds of anger, greed and delusion. How easily we forget this, how easily we come to believe that greed and anger can be who we are. This illusion is at the root of the way we treat ourselves, each other and our planet. So much technological development, and so little understanding of ourselves, of the clear unsullied nature of the mind.

And as the silent procession snakes its way through the village streets, I am reminded of the thousands of monks who have preceded me in the last centuries, and the countless ones that will follow, all guided by the teachings of a man who supposedly lived 2,500 years ago in India and who pointed the way to the end of suffering. And here we are, eight Thais and one French Canadian, following in his footsteps thousands of years later a thousand kilometers from India. How strange and mysterious life is.

4 thoughts on “A Slice of Life”